There is a certain luxury of circuit calculations for systems contain direct current that alternating current systems really do not have. It is the idea that voltage and current are “synced.” An increase in voltage will create a corresponding increase in current seemingly instantaneously. However, an alternating current that experiences voltage oscillations experiences a delay. This can mean voltage is at the highest point in its fluctuations while current only reaches such a point a little bit later at which point voltage might already be at its lowest. The ratio of voltage to current is also unclear in these circuits. This makes it hard to describe the system easily. Of course, one can look at a simple circuit with, for example, one inductance and one resistance and create a variety of differential equations through Kirchhoff’s laws but not only does this hold solely for this simplistic case, but these differential equations become extremely complicated and unappealing for actually large circuits with various components. As a result, there is a simple method that allows for the description of these complex alternating circuit systems through the use of what was shown in the last post: complex exponentials. It allows for the conversion of an alternating current circuit to that of a direct current, in some sense, mathematically. 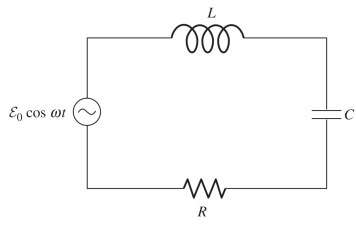 . Well this induced voltage can be alternatively describe in terms of complex exponentials as

. This would imply that there is imaginary current but one can simply take the real part of this complex number to find the actual voltage. As counterproductive as this seems, it becomes useful when seen through the lens of differential equations. Consider the equation formed from Kirchoff’s laws below.

It is known that

oscillates at the same frequency as the voltage but with a time delay. This means

can be defined as

is some phase difference between the current and voltage. Given that this can be pulled out of the exponential as some complex constant, this is further simplified to

is some complex number. Plugging this back into the above equation and using the fact that

yields the equation below which becomes very easy to simplify.

This looks very familiar. It resembles the equation

found in direct current calculations. The alternating circuit was reduced to a direct one. However, the term that replaces resistance in the above equation is called something different than resistance; it is called impedance and denoted with

resulting in the following equation.

represents some complex number that can be written as

. With all this information we can rewrite

This form of current allows us to solve for

, the current amplitude, and

, the phase difference. Knowing that

, it becomes clear that

. In the situation presented earlier,

can simply be defined as

. Using all this information, one can solve for the current as a function of time for the case above. Taking the real part simply yields the following.

The beauty of this method is that there is no need for differential equations anymore because it is possible to reduce the alternating current system to a direct current system immensely simplifying calculations. Instead of finding the resistance, capacitance, and inductance of each circuit component, one can simply find the impedance of each which yields a complex number in order to solve for both the phase offset and ratio between the voltage and current. Impedance adds in series and parallel the same way that a resistor does and can be calculated in the following way. The impedance of an inductor is

Alternatively, there is a quantity called admittance which is inversely related to impedance by the equation

. In some cases, this may be easier to use due to the fact that admittance adds like capacitance in a circuit which is convenient in circuits with a lot of parallelization.

If you want to learn more or see where I learned this from, read the book “Electricity and Magnetism” by Edward Purcell and David Morin. It should be in the “Books” page of this site.