Integrals are a great point of interest in many areas of mathematics and, when learned about, are often overlooked on the fundamental level. The ideas of Riemann integration, which is what many learn about, are very vast and complex and can provide powerful results but there exists, in some sense, a better and more general form of integration that can account for scenarios Riemann integration cannot. This is Lebesgue integration.

Allow me to first propose a function to integrate1.

This is known as the Dirichlet function. It is impossible to assign a value to

The Lebesgue measure is simply the mapping of a set of numbers to another which is comparable to the set’s “length.” For example the set

. All this is a fairly intuitive notion of length. However, measure theory can yield non-intuitive results.

For example, what is

? Neither represent a continuous interval. Well to start with just the rationals, we will number the rationals in a sequence

(which is possible because it is a countable set). Because every rational is disjoint from every other,

. This infinite summation however is ill defined so we can create an upper bound for it. Around each

, we place an interval

with the understanding that each of these intervals have a greater measure than the point alone. Because

, we have given ourselves enough information to determine the Lebesgue measure of the rationals. Look at the following inequalities.

Because this holds for all nonnegative values of

, the measure of all the rationals must be smaller than all the nonnegative numbers so it must be 0. From here, the Lebesgue measure of the irrationals is very simple. Because

. In fact, because the rationals make no contribution to length, any interval containing only the irrationals has the same length as if it had the rationals. Now, with some intuition of measures, we can form the connection between them and integrals.

Assume one were to integrate the function

over . Consider the following partition

Now consider the sets where

. Similar to the left and right Riemann summations, the two Lebesgue summations are shown below. 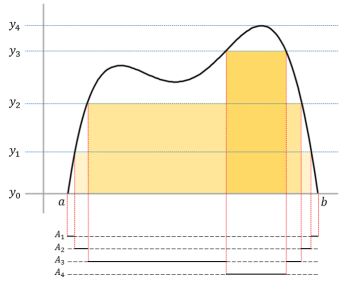 The first summation is shown in the image above. As described, an arbitrary partition was created and based on those, sets were created as shown by the red lines extending downwards marking the boundaries between them. By taking the length of each set multiplied by the second partitioned value the set is bounded by, one can sum across all created sets to reach an approximation of the area under the curve.

Now the upper and lower Lebesgue integrals can be defined where one is the infimum across all possible partitions and the other is the supremum3.

When these two are equal, this means the function is Lebesgue integrable over and the integral equals

The question still remains. How is this helpful? Well consider the Dirichlet function which was previously not integrable. Lebesgue integration tells us we can just look at the infinite partition containing 0 and all

and look at the set that is created at each of those values. Because the measure of any subset of the rationals is 0 and all the irrational values map to the x-axis, the summation yields 0. As a result, the area under the Dirichlet function is simply 0.

If you want to learn more or see where I learned this from, you can read this PDF.