Quantum Mechanics since its inception has been one of the most philosophically controversial concepts in all of physics. But what really is so confusing about quantum mechanics? The answer lies in two fundamental principles: locality and realism.

Locality – locality asserts that all information and matter in the universe is limited by the speed of light. No experiment has ever contradicted this principle thus far. One may bring up the idea of quantum entanglement with EPR pairs but if you refer to my post on Quantum Teleportation, I discuss how, even in this case, no information can actually be sent faster than the speed of light preserving locality. An interesting visualization of this is the following with light cones.

The future light cone represents all the space one can possibly affect and the past list cone indicates all that could have affected it. Note that increasing the speed of light would widen this light cone and vice versa.

Realism – realism refers to measurements. A core idea in quantum mechanics is that until measured, there is a whole probability distribution of possible states. Well this would seem to imply that the knowledge of human beings, their consciousness, somehow has an effect on the physical world. To resolve this, realism says that there was a predetermined result before experiment i.e. the observed probability distribution is merely an artifact of experiment. Such an idea loosely manifests itself in other fields like thermodynamics.

In both a gas of particles and quantum experiment, we acquire a random distribution of possibilities whether it is the velocity/energy of a particle or the position of a photon. In the former, however, we know there underlies a deterministic system of Newtonian mechanics. The hidden variables of the initial configuration is what makes it random. Upon inspection, there is no reason to believe such a phenomena doesn’t also exist in quantum mechanics so that raises the question: are there hidden variables in quantum mechanics? Realism says yes.

Both principles seem desirable and natural and this is where controversy lies. Through math and experiment, we can confidently argue that realism can’t exist without the violation of locality. Take the time to realize how significant that is. Realism seems to be a principle that transcends experiment yet somehow experiment can still find a way to deny its coexistence with locality. How?

Many turn to Bell’s theorem to explain the connection between locality and realism but recently MinutePhysics and 3Blue1Brown did a brilliant collaboration that explained it through the polarization of light. You can check out the videos here and here but I will attempt to give a shorter explanation of what they go into great detail on.

Light is an electromagnetic wave which means its merely fluctuations in the electric and magnetic field. These fluctuations are perpendicular to each other.

Light waves can however have its fields vibrate in any plane. We want to establish a basis that describes all the directions these vibrations can be in. We know from the equations that

are orthogonal so describing

will be sufficient for understanding the state of the electromagnetic wave. As we also know from the linearity of Maxwell’s equations, the principle of superposition applies to electric and magnetic fields and, as a result, light.  This means we may assign two random orthogonal directions,

, acquiring a basis. All light waves can then be written as

Now assume an entire array of light waves were sent through a polarizing filter that only allows electric field in one direction. Let’s assume this to be

which signifies the vertical axis direction. This big conglomeration of randomized electromagnetic waves will then all be aligned with the vertical axis. If these waves pass through a second polarizing filter with an angle

to the vertical, then only a fraction of light waves would pass through. To calculate this fraction, we must find out what the components of the electric field in each direction. The image below demonstrates the geometry of the situation. 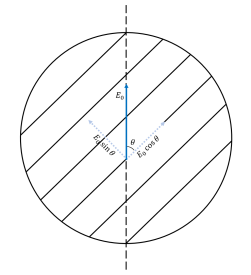 When the electric field of magnitude

approaches the polarizing filter, the component in the direction of the allowed polarization has magnitude

and the eliminated direction has magnitude

respectively. As aforementioned, we can now write this electric field as the sum of its components in each direction.

. This means this is also the fraction of light that passes through an angled polarized filter. Note: only the difference in angle of the two filters was significant, not the angles themselves.

Now consider the following experiment. We have two setups. The first setup

is two polarizing filters with an angle difference

is three polarizing filters with angle difference of

between consecutive filters (the first and last have angle difference of

). If we shine light with intensity

through both setups, what fraction of the light/intensity is observed at the other end? This could be better understood through the image below.

This is a very interesting result for the following reason. Assume the principle of realism is true. Then, assuming randomly distributed polarizations, both setups should yield the same amount of photons because the second is merely the first with a disrupting filter. A photon that already knows what its polarization is will not be affected by such change! Because this is not what happened, either the filter changes the quantum state OR the light waves have communicated information about the filters that have been passed through. The former violates realism and the latter violates locality.

As a result, if realism is true, locality is violated. The contrapositive then suggests if locality is true, realism is false. Local realism is disproved. It is important to note that this, in no sense, proves which principles are true or not but merely claims that they cannot coexist. This leads to various interpretations of quantum mechanics.

One notable one is the de Broglie – Bohm theory which preserves realism but not locality. It is otherwise known as Bohmian mechanics or pilot wave theory. This theory maintains that positions and momenta are completely deterministic. The wavefunction still exists but underneath it are pilot waves that evolve according to the guiding equation below (the math of which I admittedly know next to nothing).

are the positions of

particles. This along with the Schrodinger Equation are the defining equations for non-relativistic quantum mechanics.

As shown earlier, these pilot waves must be moving faster than the speed of light. To explain this slightly better, consider the following image provided by this article from Quanta magazine. 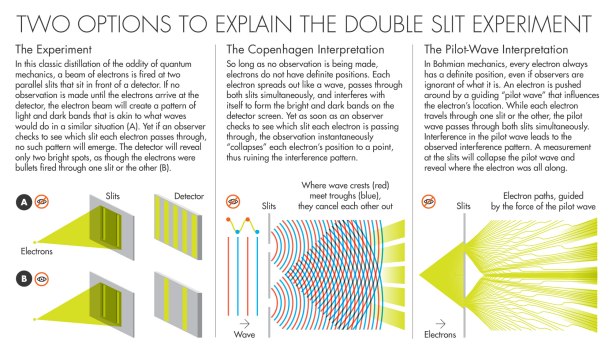 To intuitively understand this, consider the example of thermodynamics given earlier. The velocities of ideal gas particles in a container assuming only mechanical interactions is given by the following Maxwell-Boltzmann distribution.

Although the particle velocities seem to be random being only loosely determined by this distribution, they have very deterministic velocities. If we were to know, at one point in time, the position and velocity of every single particle, we could calculate the velocity of each particle exactly at each point in time. In this way, the guiding equation is to the Schrodinger wavefunction as Newton’s laws of motion are to the Maxwell-Boltzmann distribution.

There also exists another interpretation which I find to be the most dreamy of all. This is the many-worlds interpretation which asserts that at each measurement, the universe branches out into many universes where each universe encapsulates a possible outcome. Every possible outcome occurs and in a sense, this system is “deterministic”. I did read that this theory is both local and real but I have not read into it enough to understand where the locality lies. I presume it is contained because realism has been resolved outside the system of measurement allowing for locality to exist without contradiction. Feel free to let me know if you do understand this!

Note that this is only an introduction into the philosophy of quantum mechanics and the subject is vast and very interesting. Good luck exploring!

2 thoughts on “Philosophy of Quantum Mechanics”